When leaving the new library in Dun Laoghaire on Saturday, I was surprised to come across an exhibition being held by Downes Syndrome Ireland (DSI). The ‘Here I am’ exhibition (more on the exhibition photographed by Dan Murphy here).

All around one of the green areas of the new Lexicon library, huge bill board type structures with pictures of children with Downes Syndrome are displayed. Beneath each picture is a brief comment (many by parents, describing their child or describing what it is like bringing a child with Downes syndrome up in Ireland today).  The faces looking at you from the billboards are mostly all smiling children looking keen and happy to be photographed. 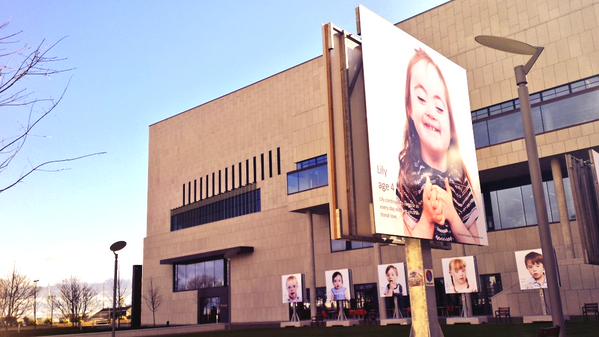 Why was I surprised? People with disability are rarely the focus of statues, sculptures, art exhibitions.  There are a few exceptions, Marc Quinn’s 3 metre high statue of Alison Lapper while she was pregnant that was displayed (temporarily) on a plinth in Trafalgar square being one. A copy of the statue, famously was displayed during the opening ceremony of the London Paralympics game in 2012.

Why do we need a statue of a person with disability?

An article in the Guardian (see link here)  asked why do we need a statue to celebrate disabled people’s achievements? Statues have been erected over the centuries to celebrate the great and the good, as defined by the era and define key movements in society. Outside the houses of parliament in London stands Winston Churchill. At the end of O’Connell Street in Dublin, stands Jim Larkin, who lead the great shut out of 1913. Two men who had and still have a profound effect on the society they lived in.

Alison is definitely a person who defines a movement. Alison lived the life she wanted to live in her own way in a society, that as Alison stated in an article during 2014 (see the article here), sees people with disability as a drain on resources.

There are four ways society can respond to people with disability. It is a useful way to look at how society is responding at the moment as the response rarely stays the same and is determined by what is going on in the world at the time.

The survival of the fittest response where people with disability are seen as not adding to what society produces and therefore can, at best, be ignored and excluded. The dependency response where societies sets up systems that ensure that people with a disability are maintained and controlled and have little or no self determination.  The independent response is a more inclusive response and sees people with disabilities as having rights and the ability to determine their own future. And finally, the interdependence response, where as a society we are seen as one complete whole (if we exclude or marginalise any sector of society we cannot achieve this complete whole), needing each other to live the best kind of life we can live.  Look at your own life and you will see that the best quality of life you have is when you are surrounded by a supportive network that support you to live the life you want to live.

For people with disability, they rely on this interdependent response a bit more. I remember chatting to a guy who got a train to work every day. He said he had a right to get the train, but without his friends who helped on and off the train at his destination station, he would not be able to travel. So when that interdependent response is not present, people with disability cannot take part.

Why we need those works of art.

So what would/does society gain from having public works of art of people with disability? Well what society would get is to focus on people with a disability as more than just a drain on resources. Definitely during austerity people with disability were aligned with being a drain. The NDA research in 2012 showed that parents were no longer as keen to have children who needed supports in the classroom alongside their children. An inclusive classroom was not seen as a good thing. Maybe this is what DSI were trying to achieve to see children with Downes Syndrome  in a positive light. That positive light being that these children  are as much citizens of Ireland today as anyone else, with the same hopes and right to live the life they want to live.

In displaying these children’s’ faces publically,  hopefully DSI will through this art exhibit define the movement towards a society that understands that their inclusion is key for us all, and that these children deserve to be included along with anyone else.  Art exhibits, statues, sculptures of people with disability, brings the issue of inclusion into the public view and via this process will create an understanding of interdependence that benefits us all.

Many of the themes covered in this blog article are covered on the BA Applied Social Studies (Disability). Click here to find out more.