On May 31st, this year, the world of disability activism, indeed the world itself, lost one of its brightest stars, Judith Snow. Described as the ‘Julia Roberts’ of the disability community, with her passion, enthusiasm and dedication, equally as famous; Judith sadly passed away.

Judith Snow, the social inventor,  was a believer in community, inclusion, giftedness, dreaming, person centredness and the almighty power of listening to a person. 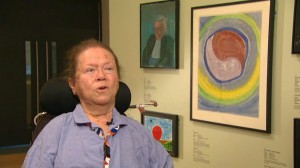 Judith Snow dreamed of being a juggernaut driver delivering items all over the globe. This dream includes much of what Judith stated was important. Instead of immediately saying, well Judith you are the most unlikely juggernaut driver there ever was or will be;  the people supporting Judith dug deeper, really listened and identified what was the real meaning  of her dreams. You start to explore Judith’s dream and what do you get. What do juggernauts do, travel, getting you and your cargo from A to B. You deliver this cargo to others, who are generally happy to receive the cargo. The cargo has value.  What did Judith want to do and indeed do with style, she travelled all over the world and delivered the message of inclusion and community.

These messages, while important and indeed essential to people with disabilities (what does your service do to facilitate these important twin goals)  are equally important to all. We all want to belong, we all want to be included. But are societies set up to achieve these goals? The answer may be that not only are societies not set up to achieve them, but can actually be a barrier to these two valuable aims.

Judith in her stories about Beverley the Olympic diver and herself,  and Peter and David; asked us tough questions about what do we value, who is society set up to support. The Beverley story (read the story here) asks why is it seen as more socially valuable for many people to group together to develop the dream of a potential Olympic diver. But not as glamorous to gather together to support a person with significant and complex needs to get an education in a mainstream school. Through this story we learn  the value of circles of support. Judith had a circle and in her book From Behind the Piano recounts how the circle (amongst other things, like staying alive)  supported her to acquire an education (Judith had a Masters) and get married. Never underestimate the power of a small crowd of committed citizens to achieve great things. As Margaret Mead said, that is the way most things get done on this planet.

And the story of Peter and David (read the story here). Peter was a fourteen year old who seemed to be disappearing in front of his parents eyes, not interested in much, bored for a lot of the time. So his parents employed David who suggested that Peter needed to get out of the ‘special’ school he was in and try something new; because the school was not working for him. So David listened to Peter and they found an alternative school where David helped in the canteen, and created poetry with his sounds.  When that had run its course, he went on to work in the community. David did not decide what was best for Peter, he listened to what he wanted. How many services are built on the words of the ‘experts?  They have told us that what people with disabilities want. Things like group homes,  day services, special schools. But have we actually listened to the people themselves, and identified what they want in life?

On Judith’s Facebook page a friend has stated that the best testament to Judith was her life. Someone who could have been so easily written off by society, was not. Through her family and friends, she lived a full life, and provided us with the concept  of giftedness (personal Velcro, what makes you interact and link with others,  or in other words, what does everyone bring to the party of life; because we ALL bring something); and a clear insight into the value of circles of support. Because without our own support networks, our own friends, our intimate others, our supporters,  life would be an empty existence. Judith asked us to value that. And see the value of building this rich network into everyone’s life (again what do services do, to support this objective). Not to exclude. But include.  Not to be lonely, but to build a community. The ability to see giftedness, not as an attribute of a bright child but something we all have.

We are all present in society. What we do everyday, how we interact, gives us the meaning we need in our life. That is the gifts we all bring. Extraordinary giftedness, in Judith’s own words, is the ability to create the ‘opportunity for interaction and meaning to a larger number and variety of people as possible’. Judith Snow had extraordinary giftedness. May she rest in peace.

If you are interested in acquiring a social care degree that captures Judith’s ideas behind community and inclusion. Click here for more details.