[dropcap style=” box,”]P[/dropcap]unk has long been the music of rebellion. Best exemplified by the Sex Pistols and their lead singer who has since gone on to advertise butter, Johnny Rotten. The man who screamed into the microphone, ‘ever get the feeling, you’ve been cheated’, to the youth of the day.

Now punk is back on the agenda (some people may tell me it was never off it) with a punk band representing Finland in the Eurovision Song Contest. Finland has a tradition of shaking up the Eurovision formula, in 2006 presenting Lordi, a heavy metal band to the proceedings, and winning.

Well , Finland are at it again, not only are they throwing punk into the mix, but a punk band made up of people who have been labelled with intellectual disabilities, autism and Downes syndrome (the media is very keen, we get all the labels in – see our post on disabling the labels here). 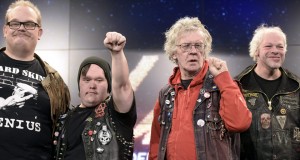 Pertti KuriKan Nimipaivat (translated means Pertti Kurikka’s Name Day- Pertti is their lead guitarist, in addition Kari is the vocalist and writer, Sami is the bassist and Toni is the drummer ) is a band  that was formed in 2009 (read more about the band here). The band arose from a culture workshop provided by the men’s support service Lyhty (a non profit organisation that provides housing and educational opportunities for people with intellectual disability).

The Eurovision spot is not the bands  first foray into mainstream culture. In 2010 and  2012, they appeared in films called ‘Gimme some respect’ and  ‘The Punk Syndrome’. The films explored how they were using the band to rail against some of the many injustices and slights they felt, while dealing with the mainstream. A bountiful well of material, for any person with an intellectual disability.

Looking at  the song titles on one of their albums, the songs translate to outline many of the challenges the group have to face. The tracks from the album ‘Cush cups of coffee … And Coke Unit’ (direct translation from Finnish)  include ‘the decision maker is a deceiver’, ‘why no one understands’, ‘I like the comforts of home’ and ‘the female next door’ provide a list of issues that is common to any person with intellectual disability in any country. One of the other songs include a tirade against the way podiatrist’s cut their toe nails.

How the Eurovision and the media  deal with Pertti will be interesting. The media’s depiction of people with disability who appear in or are dealt with, in mainstream media, falls into a number of categories. These categories include the ‘supercrip’, where the person is depicted as having to be an elite member of the disability group to have overcome or identified their challenges (an example being Christy Brown as depicted in ‘My Left Foot’). Another way the person with disability is depicted in the media is as the eternal child, a person who needs caring for but may have an unpredictable edge  (an example, being Dustin Hoffman in ‘Rainman’). Too rarely is the person depicted in the media as an ordinary person overcoming ordinary problems.

A positive depiction of people with disability is the superb ‘Marvellous’, a recent addition to the depiction of people with disability in mainstream media,  where Neil, a big Stoke Football Club fan, actually drives his own agenda (read our blog on ‘Marvellous’ here). And this seems to be the way it is with Pertti, four 40 year old plus men pushing their own agenda.

Will the media treat them as a group with something legitimate to say; or pat them on the head and say isn’t it great and aren’t we great for saying they are great; or will they be seen as a novelty act, a one year wonder , something outside the mainstream that is good to have once (in 60 years!).

Whatever happens  well done to the group for getting onto the big stage, this year the world stage (even Australia is involved this year to celebrate the Eurovision’s 60th anniversary; a cynical thought being that someone from another continent nearly appeared in the song contest before a key group of European citizens).

For this group of European citizens, let us hope that the agenda is inched forward and the need for punk rebellion lessens.  Because, in many cases with the disability industry that has grown up around people labelled disabled and the fact that their rights are still be decided upon (for example with the capacity discussions in the Dail), and the fact that many live in congregated settings that produce poor outcomes and wellbeing for them; people with intellectual disability in many cases, definitely do not need Johnny Rotten or anyone else,  to tell them they have been cheated.

[gap height=”10″]
[box style=”1 “]If you are interested in more details on courses to support you, support people with disability to develop their own agendas you can find out more about the courses and programmes here.[/box]